He sees us toddling toward him, not fallen flat on our faces. God is always looking ahead, seeing us at our best, at the end of the road.

The LORD turned to him and said, “Go in the strength you have and save Israel out of Midian’s hand. Am I not sending you?” Judges 6:14 (NIV)

The Lord turned and looked straight at Peter. Then Peter remembered the word the Lord had spoken to him: “Before the cock crows today, you will disown me three times.” Luke 22:61 (NIV)

I read a One Year Bible for my devotionals, which divides the Bible into 365 readings, one each from the Old and New Testaments, Psalms and Proverbs. Recently, the above two verses were facing each other on opposite pages, and I realized how alike the situations were. (Read Judges 6:11-22 and Luke 22:31-34, 54-62 for the full stories.)

Both Gideon and Peter were at their very lowest points. Feeling physically threatened and hiding – Gideon in a hole in the ground threshing his meager wheat, Peter crouching with the servants around a campfire, pretending he was somebody else. Both had a low opinion of themselves right at that moment. Both were denying the Lord – Peter outright and Gideon by his attitude. But worse, both felt let down and abandoned by their Lord.

“But sir,” Gideon replied, “if the LORD is with us, why has all this happened to us? Where are all his wonders that our fathers told us about when they said, ‘Did not the LORD bring us up out of Egypt?’ But now the LORD has abandoned us and put us into the hand of Midian.” Judges 6:13 (NIV)

Yet (!), in spite of their failings and weaknesses, both were being called to do great deeds and both needed strengthening. I had always imagined the looks and words of the Lord in the above verses as negative – a rebuke, a reproach, a look of disappointment.

However, all through the Bible the turning of the Face of God toward his people is a picture of favor and grace, encouraging and strengthening.

The Lord bless you and keep you; the Lord make his face shine on you and be gracious to you; the Lord turn his face toward you and give you peace. Numbers 6:23-26 (NIV)

“The picture is of divine favor – the beaming face of a parent for his beloved.” [i]

Turn to (turn toward) me and have mercy (be gracious, show favor, have pity) on me, for I am alone and in deep distress. Psalm 25:16 (NIV)

But the turning away, or hiding, of God’s face is a sign of rejection.

But the Lord turned toward Gideon and Peter. Even in midst of Jesus’ great betrayal and passion, he turned in mercy and love, grace and encouragement toward Peter. “Come on, I know you can do it. Am I not sending you?” How that look of love must have pierced Peter’s soul!

“And the Lord turned Himself … and looked upon Peter; with his bodily eyes, with great earnestness, expressing in his looks concern and pity for him; for it was a look, not of wrath and resentment, but of love and mercy, and power went along with it.”[ii]

God calls us when we are in our holes and hiding places. He calls us out of doubt and despair, when denial and worthless words are spewing from our mouths. He calls us at our worst but calls us anyway. Like a father encouraging his little child to walk, “Come on, I know you can do it!” He sees us toddling toward him, not fallen flat on our faces. God is always looking ahead, seeing us at our best, at the end of the road. The Lord is asking you to turn to him. Gain strength and favor and guidance for your way. Turn and look full in his wonderful face, for he has already turned to you.

[i] NetBible Translator’s Note on Numbers 6:25

But even as Judas betrayed Jesus he was unwittingly prophesying Jesus’ glorification. 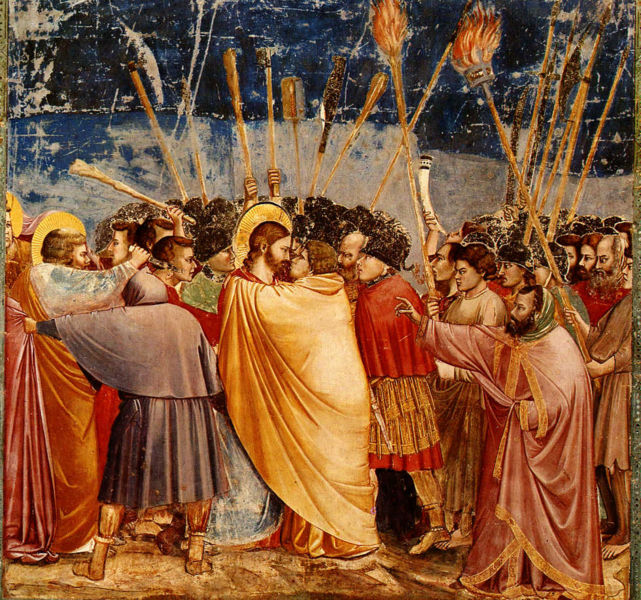 Judas had given them a prearranged signal: “You will know which one to arrest when I go over and give him the kiss of greeting. Then you can take him away under guard.” As soon as they arrived, Judas walked up to Jesus. “Teacher!” he exclaimed, and gave him the kiss. Mark 14:44-45 (NLT)

I guess, because I am a theater person, I see this event a little differently. I see it as staged theater, a kind of street theater, and Judas is directing the play. Judas is telling the guards what the stage blocking will be – I’m going to walk up to Jesus and kiss him, and then you will come and take him away. Then Judas tells them what the lines in this scene are – I’m going to say “Teacher!” His play-acting is the worst hypocrisy, for that is what hypocrite means in the Greek – an actor under an assumed character, or stage-player.

Not being a very good actor, Judas overplays his part. The word for a normal kiss in Greek is phileo, but the word here in this verse is kataphileo – to kiss much, kiss again and again, kiss tenderly and earnestly. This is the same way that Mary kissed Jesus feet, wiping them with her hair (Luke 7:38). This is the same way the father kissed the prodigal son when he returned (Luke 15:20).

Maybe Judas wants to make sure there is no mistake about the identity of Jesus, but in the process commits a most horrible blasphemy. To pretend that kind of passionate love and to do it right in the Face of God, the Presence. Imagine the power of the love that must have shielded Judas from instant destruction right there. Imagine how Judas’ treachery must have broken Jesus’ heart.

But even as Judas betrayed Jesus he was unwittingly prophesying Jesus’ glorification. For the name Judas means “he shall be praised.” It comes from the Hebrew name Judah, which means praised. He shall be praised! Maybe, through all the betrayal and heartbreak this was a comfort to Jesus. Like a secret message from the Father. “This is my beloved Son. He shall not return to me empty, but he shall accomplish that which I purpose, and succeed in the thing for which he was sent.”¹

He shall be praised!

Image in the Public Domain. Jesus and Judas, by Giotto (Scrovegni Chapel, Padua)