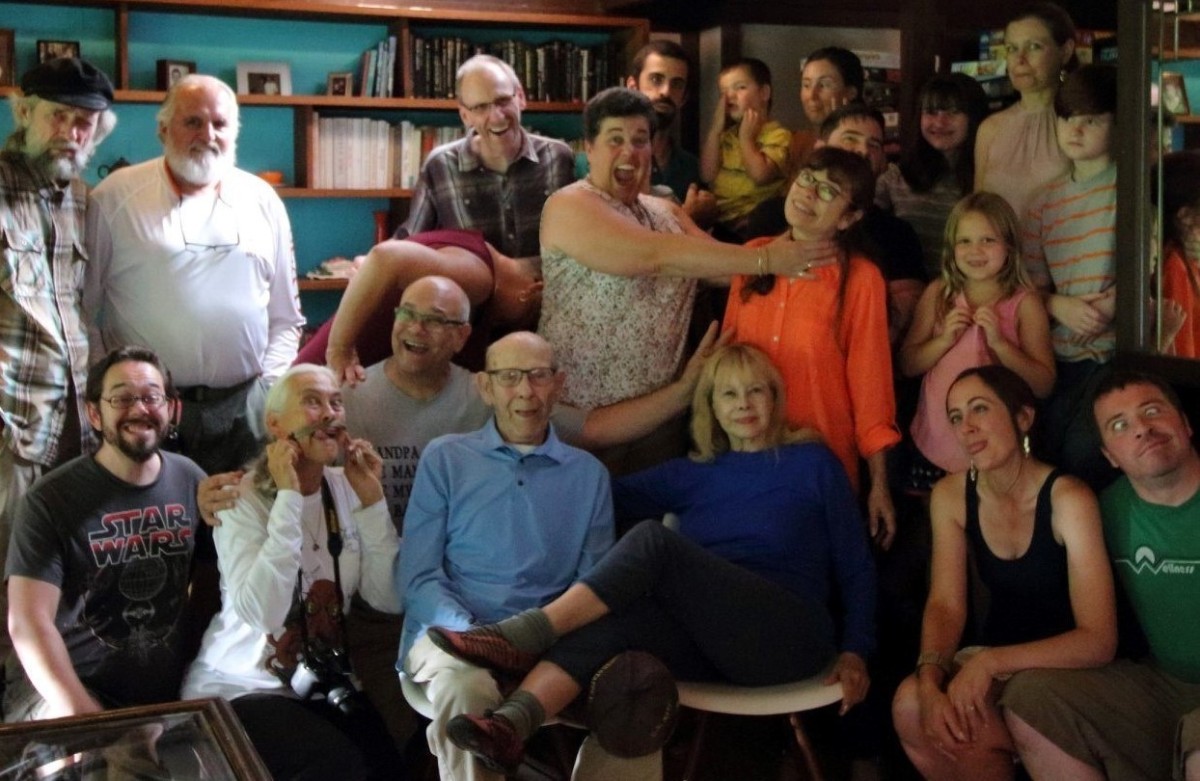 A few years ago, I sat down with my dad and recorded some memoirs of his life. The result revealed a funny, passionate, pretty cool guy. Dad passed away this week and we bury him today. I know this is long, but I would like to honor him by sharing some of his life with you.

Dad was born in Ionia, Michigan, in 1927. He remembered that his mother kept him in long blond curls and lacy shirts (Little Lord Fauntleroy costumes) until he was three or four. He hated that. He had to wear knickers until he was eight or nine and really hated them. When he got his first pair of long pants he felt very grown up.

When Dad was 12, they moved to a farm three miles north of Muir in Ionia County. He remembered getting up early enough to do the chores (feed the animals, etc.) before walking to the one-room school. In the cold months he had to get to school early to get the fire ready and the school warmed up. On the farm that Dad had the responsibility of a large half-acre “truck” garden. He had to plant, weed, and harvest the vegetables and take them to market in town. But he got to keep the profits, and he was able to save up enough money to buy his first beautiful bicycle from the Sears Roebuck catalog.

Dad also raised a calf which won the blue ribbon at the County Fair. The animals loved him. Dad remembered one rooster in particular who would run down the drive to greet him every day when he returned home. That affinity to animals continued. I remember our dog Rowdy and my Dad “singing” together. My Dad would sing and Rowdy would howl along with him. That dog loved my Dad.

My Dad was always a prankster. He told me some mischievous things he did as a teen. One time he and his friends put a large oak table in the middle of the highway to see a truck hit and demolish it. The driver got out and chased them, but he hid in a cornfield. Another time they took apart a wagon and put it back together on somebody’s roof. One favorite prank was to fill a paper bag with cow manure and set it on fire on a front porch and then knock on the door and run. Of course, the owner would come out and stomp out the fire.

One time a not-so-happy victim chased them. They scattered, running through back yards, trampling gardens and breaking down fences. The next day he was all innocence at the breakfast table as his scandalized parents read the headlines in the small-town paper: Hoodlums Destroy Victory Gardens.

He told me that one of the worst punishments his mother could mete out was the phrase, “You will have to tell your father when he gets home.” Then he had to go all day dreading when he had to confess to his father what he did. Grampa Roy usually went easy on him though – being a joker himself.

When he was in high school, he played football. In one game he was hit in a “whipsaw” (hit at the top and the legs at the same time from different directions) by two guys from the opposing team. He got a concussion and couldn’t remember the rest of the game. But the Ionia Sentinel Standard reported the next day that Douglas went crazy in defense, not afraid of anything. A year or so later when he was stationed on Bikini a Navy ship was anchored off shore. Two sailors got permission to come ashore to see him. They asked, “Are you Douglas?” They were the two guys who had hit him, and they were the ones who told him what happened the second half of the game.

His Uncle Hiram told Dad that if he learned Spanish, he could go with him to South America when he graduated. He took Spanish but struggled. The war broke out and ended that plan. However, for the rest of his life he tried out his broken Spanish whenever he met Spanish-speakers. They usually gave him bemused, but polite, answers or nods. He also, on purpose, massacred French saying when parting company with you, “Your reservoir my sewer – that means good bye in French.”

Dad joined the Navy at 17 as soon as he graduated from high school. He got a cyst removed from his leg ahead of time, so there would be no possibility he would be 4-F and not allowed to enlist. He got his hair cut real short ahead of time too so when he got in the chair at basic the barber took one look at him and said, “Get out of here.” But then – disappointing to him, but good for us – he got scarlet fever and had to be quarantined.  The war ended before he got out to the South Pacific.

He stayed in the Pacific though as a Navy corpsman attached to the 53rd Seabees construction battalion. He was based in San Diego, Hawaii, Kwajalein Atoll, Enewetak Atoll, and Bikini. His last duty station was Bikini as they prepared for the atomic bomb testing. Most of the guys had to go back out to the ship at night, but Dad was allowed to stay on shore in the medical tent. The tent had a refrigerator in it for medicines and penicillin and the guys would store beer in it. Other Seabees would bring steaks down from the food tent and a radio that got state-side music and they would grill steaks and listen to the music at night. Dad also talked the guy that usually did the food inspection before the soldiers could eat their meals into letting him do the inspection. That way he was first in line for chow.

Upon his return from duty, Dad was accepted at Central Michigan University, where he studied for one year before transferring to the Western Michigan University occupational therapy department in 1947. Dad was staying at the YMCA while attending school, when he met my Mom at a dance in December of 1948. He had heard music and wandered down to the gym. They noticed each other through the crowd, but my dad was too shy to ask for a dance. Mom told her sister, “That’s the man I’m going to marry.” As the dance was ending Mom finally went over and introduced herself. My Dad never had a chance. He remembered the sweater she wore his whole life. They danced together at the next dance and never stopped. They taught ballroom dance for over 60 years together, only retiring just a couple of years ago.

In a quiet moment just days before he passed into glory, we talked about going home and standing in the Presence of God. We talked about that we can’t stand before God because of good things that we have done or because we are, what he called, a “big wig” in the church. That none of that means a thing to God. The only thing that means anything to God is what Jesus did for us on the cross. That we are standing before him in filthy rags if all we have are the good things we have done. At least, if that is what we are trusting in.

He stopped being able to talk much soon after that, but I know we will meet again in God’s Presence. I love you forever Dad and will miss you greatly.

Your reservoir my sewer.

Photo, family photo shows that my Dad’s legacy of humor lives on in his crazy family. He’s the one in the middle in the bottom row.